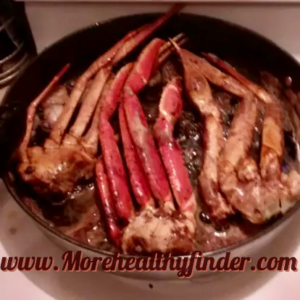 Oven-Baked Crab Legs with Garlic Butter are cooked using either snow crab legs or king crab legs and Old Bay Seasoning. It’s very easy to bake them in the oven! In only 25 minutes, they’ll be ready to eat.

If you don’t have snow crab, you may use king crab instead. Snow crab legs are often sold by the pound in clusters. Compared to king crab legs, its smooth shell makes it much simpler to handle and break. Each cluster has at least four legs. They have a light, sweet taste.

The shell of king crab legs is quite spiky. They’re huge and usually sold by the pound, either singly or in bulk. The meat is softer and sweeter, making it more appealing. They’re more expensive than snow crab. In this recipe, you may use any kind of carb.

There will be a lot of precooked and maybe frozen crab at your grocery store. If it’s bought thawed, it’s possible that it was thawed from frozen, as well. They are cooked on the boat and then flash-frozen immediately after being caught. When you buy the crab legs, if they are orange or red in color, they have likely already been cooked.

HERE IS THE DETAILED METHOD TO MAKE THIS « BAKED CRAB LEGS IN BUTTER SAUCE » RECIPE: