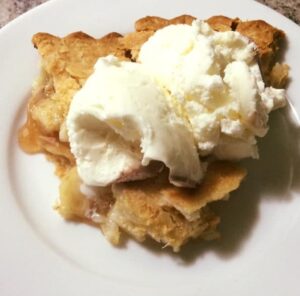 HOW TO MAKE APPLE PIE?

Make no mistake about it, this is the greatest homemade apple pie you’ll ever taste! It has a flaky, buttery crust, as well as a delicate, gently spiced apple pie filling in the center. Using a mix of apples will give you the most flavorful result. Bake until the top is brown and the filling is bubbling.

Enjoy this quick, no-fail apple pie recipe created with a handmade pie crust that’s buttery and flaky and a filling that’s comprised of a variety of various sorts of apples mixed with spices, vanilla, and a dash of brandy.

During the holidays, this apple pie is the most often requested pie in my family. I normally prepare two of these so that we may have one for lunch and one for dinner. Pie for breakfast? Is there anything better than that? A variety of apple varieties should be included in your pie for the greatest results. Some apple kinds cook more quickly than others, depending on the variety. Some apples cook up hard, while others cook up more mushy; some apples are sourer, while others are sweeter. By mixing them, you’ll obtain a taste that’s more complex and richer. A balance of acidic and sweet apples, as well as a combination of apples that cook up firm and soft, are what you’re looking for. Having said that, certain apples are more suitable for baking into pies than others.

Peel and core the apples, then slice or coarsely chop them into 1/2-inch chunks.

Apple slices should be placed in a big mixing basin with a little lemon juice or apple cider vinegar to help prevent them from turning brown while you are cutting them.

In a large mixing basin, combine the sugar, flour, and spices (allspice, nutmeg, cinnamon). Add the flour mixture to the apple slices and gently massage the flour into the apples with your hands to ensure that they are evenly covered with flour.

Then drizzle in the brandy and vanilla essence, stirring to thoroughly coat all of the apples.

Put a big rimmed baking sheet on the lowest oven rack and close the door. Pre-heat a second rack to 375°F by placing it on the next rung up.

Take one disk of pie dough out of the refrigerator and place it on a baking sheet. Allow for 5-10 minutes of resting time at room temperature. Place the disk on a clean, flat surface that has been gently floured. Roll out the pie crust to a 12-inch circle, approximately 1/8-inch thick, using a rolling pin.

Make sure the dough doesn’t cling to itself as you roll it out. To prevent the dough from sticking, carefully pick it up and sprinkle a little extra flour on the table surface or the pie crust to prevent it from sticking.

Gently press the rolled-out dough into a 9-inch pie pan to form a pie crust. To line the pie plate with the dough, press it down firmly.

Arrange the apple pieces in the pie dish that has been lined with dough. Make a mound of apples in the middle of the plate.

Again, roll out a 12-inch disk of dough. Place the second circle of pie crust on top of the apples in a gentle manner. Using kitchen shears, trim any extra dough from the edges of the pie pan, leaving a 3/4-inch overhang on the sides.

Stir the egg yolk and cream together in a small bowl with a fork until smooth. Apply the egg wash to the top and fluted edges of the pie using a pastry brush. Make slits in the top of the pie crust with a sharp knife to allow for steam vents to escape.

Pie should be placed on an oven rack that is centered over a baking sheet that is below it to collect any drippings. Bake the pie at 375°F for approximately 20 minutes, or until the crust is beginning to softly brown.

Then lower the heat to 350°F and continue baking until the crust is brown and the liquids are bubbling, which might take anywhere from 45 minutes to an hour.

Place the apple pie on a cooling rack and allow it to cool for at least 1 hour. Serve at a temperature that is slightly warmer than room temperature. Vanilla ice cream is an excellent addition to this pie.