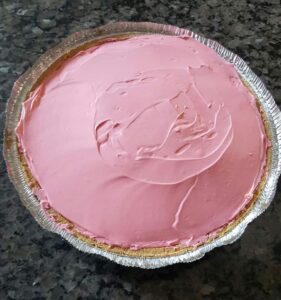 HOW TO MAKE KOOL-AID PIE?

One of the greatest pie recipes ever is prepared with just four ingredients, and Kool-Aid is at the top of the list of ingredients. Besides being fast and simple to make, this creamy Kool-Aid Pie recipe gives you the option of choosing the flavor. It’s the ideal addition to any spring or summer picnic!

Let’s face it: the tastiest desserts are ones that are quick to prepare and can be served at any time of the year. In addition to being delicious, this creamy Kool-Aid pie requires no baking! Consequently, you won’t have to bother about preheating your oven throughout the warmer months of the year. And the most important ingredient may be swapped out! You may try different flavors of Kool-Aid.
In addition to being one of the best possible pie recipes ever, Kool-Aid Pie may be the quickest and most straightforward to make. That’s not all; it only requires four ingredients, so if you want to try it, I listed them all below:

Unsweetened Kool-Aid, I used one package of 6.2 grams.

For making the Kool-Aid pie, you need to start by combining the sweetened condensed milk with the Kool-Aid package in a mixing bowl until thoroughly blended.

Then, using a silicone spatula, gently fold it into the bowl of the whipped cream until the white streaks are no longer visible.

At this point, you need to pour the mixture into the pie shell and spread it out evenly using your spatula.

To finish, you should place a lid on top of the pie and set it aside for two to four hours before cutting it into slices to serve.

Remember to take pleasure in every piece of this amazing pie, and please don’t forget to share it with your friends!!!

When serving, add a dollop of whipped cream to the top of the pie for an extra creamy touch.