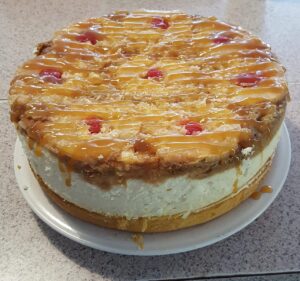 HOW TO MAKE  PINEAPPLE UPSIDE-DOWN CHEESECAKE?

When it comes to dessert, pineapple upside-down cake is a classic that represents the 1950s but also the 1960s as much as Wonder Bread does in our modern-day. Personally, I’d like to eat the cake instead. I wanted to experiment with a cheesecake variation on the original since you all know how much I like making cheesecakes! Knowing that flipping the cake upside down would not work, I wanted the same sticky, gooey topping with large bursts of pineapple taste that I had in the original recipe.

This pineapple upside-down cheesecake is decadently thick and delicious, and it’s perfect for a special occasion. Delicious pineapple cheesecake topped with pineapple rings, cherries, and pecans in a brown sugar glaze is a dessert that everyone will like. There isn’t a single taste or texture that is overshadowed by this simple graham cracker crust!

My favorite part of this cheesecake is the filling, which is thick and rich in the manner of New York cheesecake. It just has a little touch of pineapple flavor, so it doesn’t become overwhelming, you understand? To be able to taste the brown sugar, the pecans, the explosion of cherry, and everything in between… Just a moment as I clean the inside of my lips.

FOR THIS AMAZING CHEESECAKE, YOU’LL NEED THE FOLLOWING Ingredients :

2 Cans. Of pineapple slices, I used the 8-ounces cans.

First, you need to heat the oven to 325 degrees Fahrenheit (165 degrees Celsius).

In a 9-inch pie pan, combine 2 tablespoons of butter and brown sugar until well combined; spread the mixture gently to cover the bottom of the pan.

Place pineapple slices on top of the ice cream. Using a cherry, place one in the center of each piece of bread.

In a mixing basin, whisk together the cream cheese and three-quarter cup white sugar until well combined. Add the bitter cream and vanilla essence and mix well. Make sure to thoroughly mix everything.

Add the eggs one at a time, mixing at low speed after each addition until everything is well combined, and now you need to pour your batter into the cake mold.

Bake in the preheated oven until the center is almost done, about 55 minutes to an hour.

To remove the cake from the pan, run a knife down the interior edge of the pan. Allow it to cool fully, which should take about 30 minutes.

Remove the pan from the oven and turn it over onto a serving dish, and of course, put it in the refrigerator for at least three hours before serving.

TRY OUR AMAZING PINEAPPLE UPSIDE-DOWN CHEESECAKE ASAP!! YOU WON’T REGRET IT! NEVER!! WE WISH THAT YOU’LL ENJOY IT!