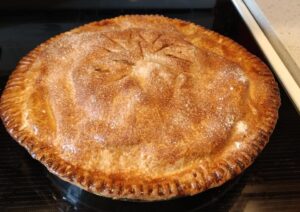 HOW TO MAKE APPLE PIE?

Classic Apple Pie Recipe with a handmade apple pie filling that is impossible to resist. This recipe consistently receives rave reviews, thanks to everything from the finest flaky pie crust to the abundant moist filling. This is the pie that everyone is expected to prepare for Thanksgiving dinner!
This Apple Pie recipe is a hidden gem of a dish. The technique used to make this filling is unusual, but it will win you over in the end. It’s definitely worth the additional 5 minutes, and you’ll never go back to canned apple pie filling after trying this.
Homemade apple pie is simpler to make than you may think if you use the correct recipe.

FOR THIS APPLE PIE, YOU’LL NEED :

2 Pounds. Of peeled apples, I cored and sliced them thinly.

The egg wash; One large-sized egg mixed with a large spoon of water.

I started with the pie crust, personally, I prefer to prepare mine, but when I made this recipe I was a little bit busy so I bought the store-prepared pies, I put them in the fridge to chill while I’m preparing the filling.

Next, I set the temperature of my oven at 425 degrees Fahrenheit.

Then, I melted the butter in a medium saucepan over medium heat until it was smooth, and I whisked in 3 large spoons of flour, then boiled for 1 minute while continuously whisking.

After that, I brought the mixture to a boil by whisking in 1/4 cup water and 1 cup sugar, I reduced the heat to low and continued to simmer for 3 minutes, whisking constantly, before removing the pan from the heat.

And, I sliced the apples into thin slices and put them in a big mixing bowl; I added in the ground cinnamon and I tossed to mix, and I poured the sauce over the apples and tossed to evenly cover the apple slices with sauce.

At this point, I sprinkled the flour over the work surface and I spread out the bottom pie crust to a 12-inch circle in diameter.

To assemble, I spooned in the apple mixture, mounding slightly in the middle and being cautious not to get any apple mixture onto the edge of the pan, which would make it difficult to seal.

Following that, I rolled the second crust into an 11-inch circle and cut it into 10 strips of equal thickness using a pizza cutter. Strips should be arranged in a woven lattice design over the top, And I brushed the top of the pie using the egg wash.

I removed the pie from the oven and let it cool for 1 hour of resting time at room temperature before serving.

Once you make this recipe, I would love to see your feedback on it!! So please don’t forget to add your comments below!! Enjoy it!