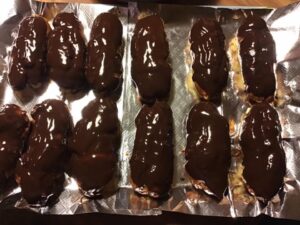 HOW TO MAKE CHOCOLATE ECLAIRS?

Have you ever wondered why your eclairs were still soggy or flat? Or why do they have a concave-shaped bottom or a large crack running straight down the middle?
You’ve actually attempted every recipe for perfect eclairs out there and ended up with boring, depressing eclairs instead? Then you’ve landed in the right place!
Today, I’ll show you how to prepare Foolproof Chocolate Eclairs, the most delightful eclairs you’ve ever had! This chocolate eclair recipe is extra unique because of the rich filling and fudgy frosting.
It has a heavenly flavor. Is there anything better than an eclair? It’s slightly sweet, rich, and chocolaty goodness.
Don’t hesitate to try my chocolate eclairs recipe, it’s one of my successful recipes!! So you can never go wrong with it!!

FOR THE DOUGH, I USED:

Salt, I just used a pinch.

Zest of a large lemon.

FOR THE FILLING, I USED:

FOR THE CHOCOLATE DIP, YOU’LL NEED:

THIS RECIPE IS A BIT MORE ADVANCED, BUT IF YOU FOLLOW THE INSTRUCTIONS CAREFULLY, IT SHOULD BE PERFECT:

To start, I brought 1/4 cup of water to a boil with the butter, then I added the salt and lemon zest.

Then, I removed the pan from the fire and stir in the flour all at once. Often, kindly I used a wooden spoon to stir vigorously.

And, I returned to the heat and stir constantly until the dough comes off the pan in a single block, which should just take a couple of seconds.

As the timer goes off, I removed the pan from the heat and added the eggs one by one, stirring well between additions.

Then, using two teaspoons, I molded 8-cm-long eclairs in a buttered baking tin.

And I baked for about 10 minutes in a hot oven until they puffed up, I reduced the heat to low and simmer for another 10 to 15 minutes, and I removed them and enable them to cool in the oven.

After that, I whisked together the egg yolks and cornstarch, making sure to dilute with condensed milk diluted in a glass of water, stirring constantly over low heat until it thickens, then I added the butter or margarine and the vanilla extract.

After it has thickened, I took it off the heat and put it aside to cool.

I cut a slit in one side of the eclairs and covered them with the cooled cream that it has cooled.

At this stage, I melted the chocolate in a bain-marie, added the butter, and used it to coat the eclairs.

Using my basic recipe, you can now create Chocolate Eclairs at home. The divine airy pastry shells, rich pastry cream lining, and thick chocolate glaze!!! JUST TRY IT AND PLEASE SHARE WITH US THE RESULTS IN THE COMMENTS SECTION BELOW!!