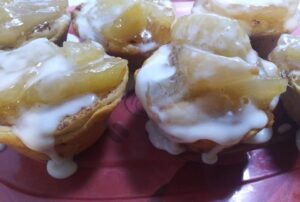 HOW TO MAKE APPLE PIE CUPS?

These 2 Ingredient Apple Pie Cups are such a nice way to equally taste a cinnamon roll and apple pie flavors! This 20-minute recipe is great anytime you want a delicious, hot pastry drizzled with frosting, but with minimum effort, for either breakfast or dessert, it’s the best.

A medium can Of -Pillsbury- refrigerated cinnamon-rolls, with the frosting.

I preheated the furnace to 375F and sprayed 8 wells of a muffin pan with non-stick cooking spray.

For 5 minutes, I let them cool in the pan, then I removed and put on a wire cooling rack.

I drizzled over each apple pie cup the cinnamon roll frosting.
And that’s all, there are ready to serve!

After you try making this easy apple dessert, you might want to be more creative and try other variations.

You can use a Different pie filling, or you can add the cream cheese, it depends on you!