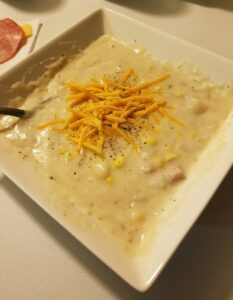 HOW TO MAKE HAM AND POTATO CORN CHOWDER?

Another delectable soup to bring to the recipe rotation is Creamy Ham Potato and Corn Chowder! You can never really get enough of so many soup recipes, particularly when they’re so creamy and full of goodness! You’ll get a thick broth filled with lots of potatoes, sweet corn, and salty ham.

1 pound and half of the diced potatoes.

Salt And Pepper To Taste.

I heated the oil over medium heat in a large saucepan, I added the diced onions, diced carrots, and diced celery and I cooked for around 10 minutes until tender.

I mixed in the garlic, the chopped thyme, and flour or rice flour and simmer for around 3 minutes until the flour is lightly browned.

I stir in the broth gently, then I added the milk and diced potatoes, I brought the mixture to a boil.

I reduced the heat and simmer for around 12 to 15 minutes until the potatoes are tender.

I added the corn and ham, I cooked for 10 more minutes until heated, and I season with salt and black pepper.